Last time we talked I was lying on the cold hard ground (oh! trouble trouble trouble).  More specifically we had just called a plumber to come fix a busted pipe fitting uncovered during part 1 of the downstairs bathroom reno.  Luckily we have a friend who is a professional and he fixed us right up.  While waiting on him to arrive we went ahead and started painting and did a rough install of the bead board panels.  I had marked the back of each piece as it was cut at the store so all we had to do was mark the studs, place the appropriate panel, and nail in place (using a brad nail gun).  We opted not to use liquid nails so not to destroy the drywall underneath in case we wanted to remove the paneling down the road (in hindsight, it was such a pain to finish that I hereby decree this stuff is NEVER coming down).  This isn’t a high-moisture area like a bathroom with a shower so adhesive really wasn’t needed.  We just made sure to place lots of brads into each stud as well as along each edge.  There were a lot of gaps between our boards due to the uneven walls and not exact cuts (still, free) but it wasn’t anything I knew caulk couldn’t fix.  We just made sure to level everything out as best we could as we went along.

At the end of day one we had all the bead board hung, the paint cut in, attached the existing faucet to the new vanity, and screwed the vanity into the wall.   I took a bazillon pictures of how the faucet was connected to the old vanity top before taking it apart so I would know exactly how things went back together.  I posted this picture on instagram:

Oh yeah, did I mention Chloe, our youngest Boston Terrier, decided the existing p-trap was an awesome chew toy?  Ga-ross.   (good thing she’s cute!)  It turns out however that was the least of our problems 😦

On day two we attempted to hook the plumbing back up.  We had picked up a replacement p-trap for the one Chloe chewed and installed it but when we went to hook up the faucet to the water lines we COULD NOT get the ‘old’ plastic one to go on correctly.  It kept cross threading and therefore wouldn’t seal properly so when we turned the water on it was like old faithful geysering under our sink.  ::cue round two of fetal position crying::

We were all set to call the plumber back in to replace the plastic connector when Matt’s Dad stopped by to see if he could help.  After a few minutes of messing around with the connections he got it to thread correctly!  Somebody should give that guy a raise!  I can’t even begin to express the relief and gratefulness I felt for having a fully functioning sink with no leaks (p.s. every time I turn it on now I secretly fear it’s going to bust open and gush water again).

So that brings us to the finishing touches.  Matt finished rolling the walls (they are Van Courtland Blue by Benjamin Moore in case you’re wondering) and then we started on trim work.

We bought pre-primed 1″x3″ trim boards in 8′ lengths at the same time as the bead board.  Matt cut them down to the measurements I had already planned out the wall panels and then we leveled them, pre-drilled into the studs, and screwed them in.  A few of the shorter walls didn’t have studs so we ended up using the nail gun to attach them.  I wish we had done this for all the pieces because it was much easier and left much smaller holes to fill.  The last step this day was to fill all the nail holes with putty.  As least I think it was this day, it all runs together 🙂

After this I think we let it sit for a week or two.  I was really kind of wishing we had never started the project at all and dreading doing more work.  I finally got up the nerve to finish (it was pretty much a one-man-at-a-time job at this point since the bathroom is so tight) and started by sanding flush all the putty spots.  Then I wiped everything down with a damp cloth to remove all the dust.  We had already picked up some DAP paintable white caulk and I began filling in all those cracks.  I just ran a thin bead of caulk along an entire seam and then ran my finger over it to smooth it out.  I kept a damp paper towel nearby to clean my finger after each swipe.  The first few were fine and then I got to the vanity side of the wall.  In our haste and frustration with the plumbing we didn’t think to caulk & paint before we attached the vanity to the wall (and stripped out the screws).  For fear of destroying all our work with the plumbing I knew we couldn’t remove the vanity however I also couldn’t get the caulk gun into the corners beside it.

Thus ensued round three of fetal position crying (or was it four?  I can’t keep track).  I sat crouched on the ground beside the vanity, squirted caulk on my finger, and stretched to get caulk into those corners.  All the while crying.  We aren’t talking normal cracks here either.  These are most uneven walls in our house which meant both sides had gaps up to a 1/4 of an inch wide.  Maybe not a lot in an accessible place but in a two-inch wide crevice this meant about an hour of ‘squirt, stretch, and spread’ (awkward).  It took me a couple of days to finish it all but in the end it was completely worth it.  The last step was painting the bead board and trim all in semi-gloss trim paint (leftover from building the house) which luckily only took one coat since we bought everything pre-primed.

After letting the paint dry I put back on the outlet covers, re-hung the hand towel holder & picture and added back accessories.

And guys, we’re in LOVE, just check it out for yourself: 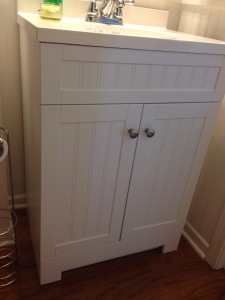 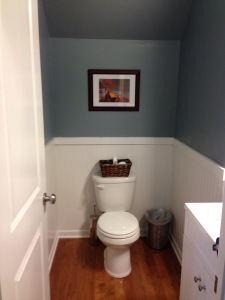 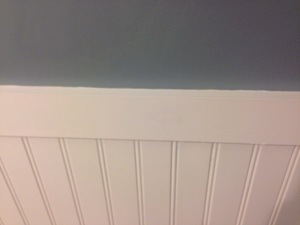 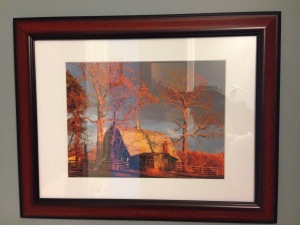 Every time we walk past this room Matt and I both can’t get over what a difference it has made.  And it almost makes us forget just how awful renovating it was.  I’m proud of the work we did no matter how many mistakes we made… and I’m glad it’s done!

One more last ‘before & after’